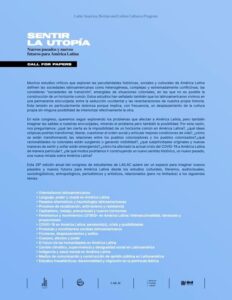 There exists no place on this planet where the trace of human existence is not felt, whether it be indirectly or directly. Irreversible changes to our Earth have generated inevitable human resistance, from the anticolonial initiatives of indigenous groups to the youth marches taking place in the world’s largest cities. We can classify this current geologic period—marked by the drastic transformation of terrestrial happenings due to human behavior—with the term anthropocene. The anthropocene is evidence of the devastating biophysical consequences of the dominating socioeconomic system of the modern day. Ecology is inevitably involved in this discussion, as it is central to the uprising demands in justice, equality, and inclusion that are taking place across the globe in the fight for survival. In our consideration of the anthropocene, we ask ourselves: what changes in our modes of being and doing, and what political actions are fundamental to combat social and ecologic injustices? The geologic metaphor of the anthropocene spurs us to consider how hegemonic impositions generate irrevocable erosion in the harmonic structures of life. At the same time, this current ecologic crisis offers the possibility to imagine and recognize other political, economic, and discursive orders in the production, cohabitation, and power relations between all forms of life, human and nonhuman. 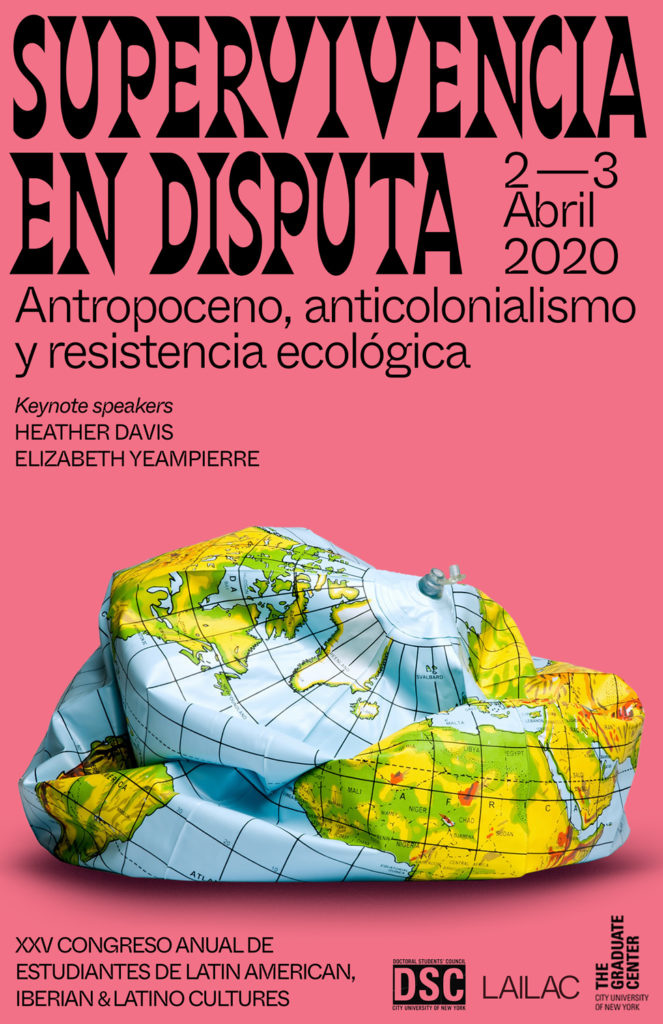 Feminist discourses generate new spaces of discussion and critique; spaces often configured by dissident bodies and discourses that destabilize the production of gender and social organization. The potency of the feminist subject lies in the subversion and redefinition of the existing tension between, on the one hand, the critique of the imaginaries and representations of gender in institutionalized spaces, and on the other, the attention to other forms of existing and coexisting that resist capitalist, patriarchal, and heteronormative logics. From this perspective, the dissident power of solidarity, vulnerability, and care allows us to trace a political environment in which affective labor reimagines the conditions of equality and otherness in various spheres of life. Thinking from feminisms, cares and dissidences suggests a reconfiguration of the value assigned to bodies who work, produce and reproduce; a reconfiguration that brings us to question the very notion of body and what a body can ___. 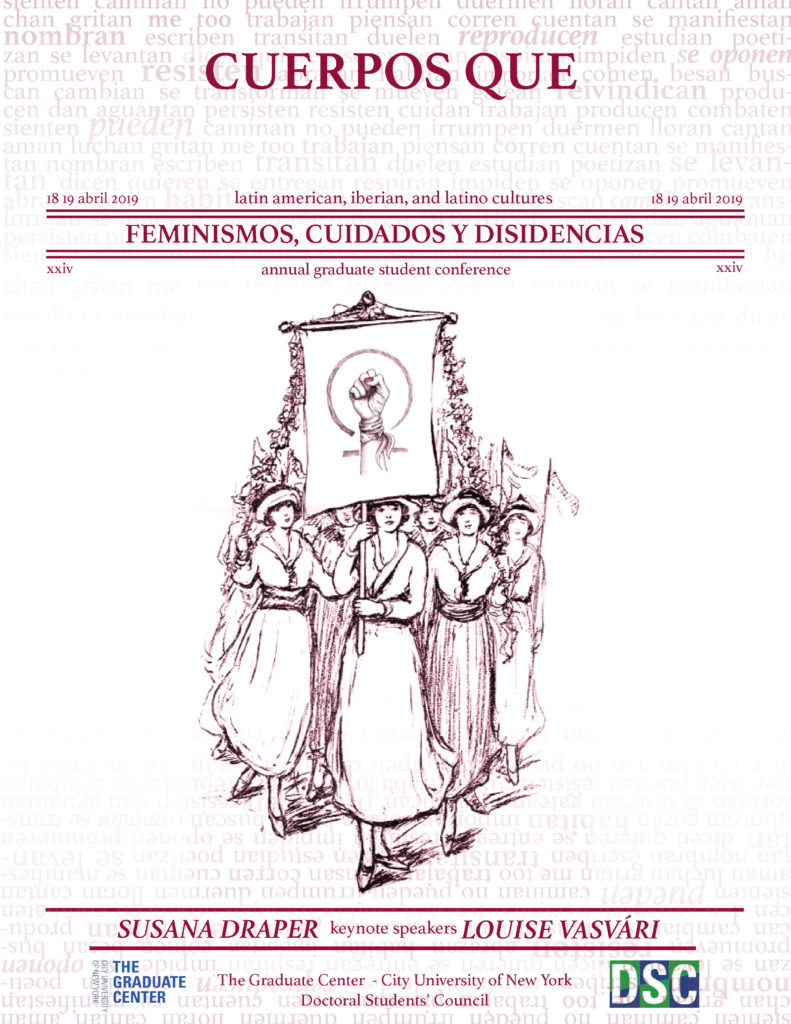 One hundred years have passed since the university reform of 1918 that began with a student revolt in Cordoba, Argentina. Later, this movement ignited a wave of student activism and autonomy that extended to the rest of the Americas. In light of the centennial, we would like to reflect on and think about social and cultural movements as agents of change in forms of governance. Is it sufficient to think about notions such as “War,” “Revolution,” and “Revolt” in the context of the transnational conflict that we face today? The central questions of the XXIII LAILAC Student Conference revolve around the issues of governance, social movements, cultural trends, and countervailing powers in connection, whether organically and/or forcefully, to forms of hegemonic control. We would like to engage in a conversation that incorporates historical, cultural, and linguistic contexts within Latin American, Peninsular, and Latino communities. Proposals relating to other areas and territories are also welcome. We believe that this is a moment of urgency in which we must revisit the conventions of these movements and from there reimagine ourselves historically. We propose opening a space to explore our strengths and weaknesses with the hope of presenting broader horizons and new possibilities. In line with the work being done by and within the LAILAC department we are especially interested in bridging the gap between academia and the streets. 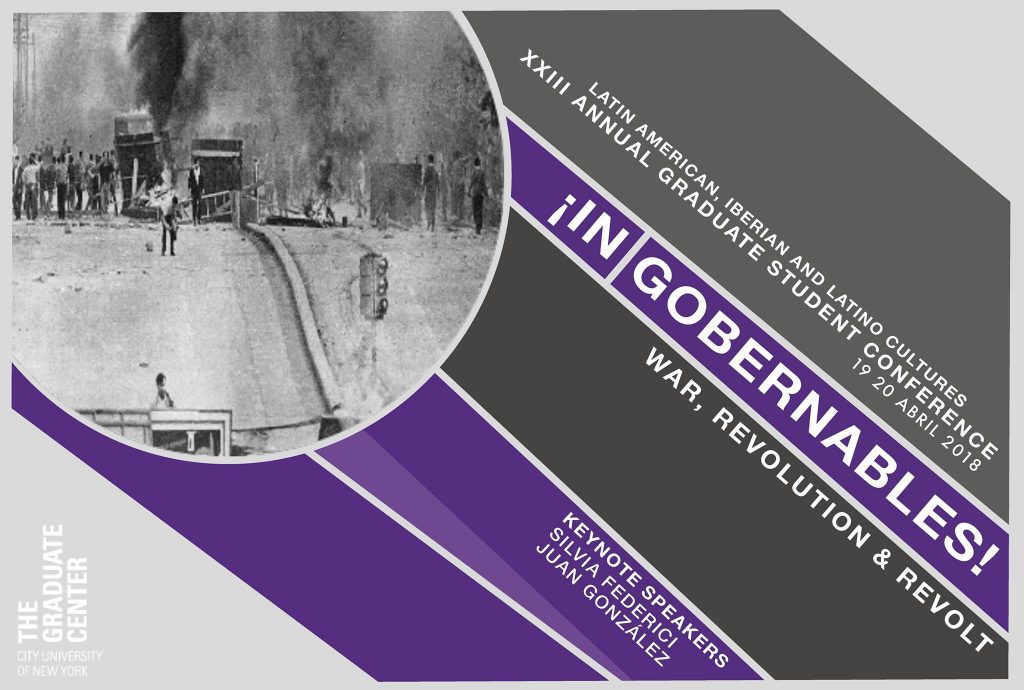 In current debates, the idea of a wall becomes a point of discussion from which to explore the relationship between public engagement and academia. Are the walls that separate intellectual, linguistic, artistic, social, and political practices insurmountable? What other metaphors of the wall speak to us? How do we imagine these metaphors and what forms do they take? Who constructs them and who challenges them? When are they useful and when are they not? How do we cross them? This conference proposes to jump over, perforate, cross, and tear down walls. It invites us to transgress academic hermeticism in order to overcome isolation and promote reflection on intellectual work, its social dimension and its relationship with the public. Through original investigations, we hope to discuss limits and their forms, whether they be self-imposed or constructed, and strategies to overcome these limits. 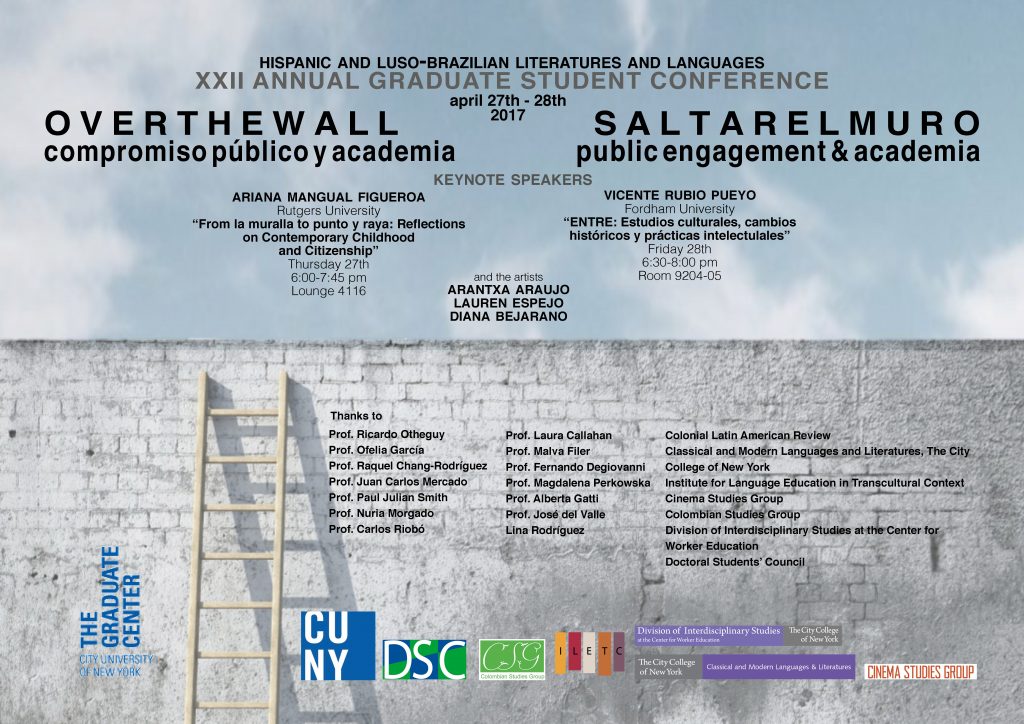 This entry is licensed under a Creative Commons Attribution-NonCommercial-ShareAlike 4.0 International license.

Need help with the Commons? Visit our
help page Send us a message
Skip to toolbar

Built with WordPress Protected by Akismet Powered by CUNY